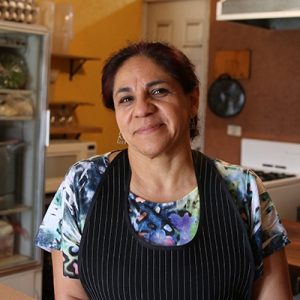 Lorena at her restaurant in Xochimilco, Mexico.

If Lorena had to describe Pro Mujer in one word, she’d say “success.” Before taking out her first Pro Mujer loan in 2008, the 48-year-old businesswoman sold food in a tiny rented space in the heart of Xochimilco, a Mexico City borough. Magdalena Montaño, now a Pro Mujer regional manager, approached Lorena and invited her to join Pro Mujer. Her first loan was under $30.

Since that day, Lorena has not only expanded her business exponentially, but she’s also relocated to her very own space, a two-room restaurant adjacent to her home, and hired two employees to help her run it. At El Itacate, Spanish for “doggie bag,” Lorena serves breakfast and lunch to passersby and a loyal clientele of lawyers and government employees who work nearby.

Currently, Lorena has two loans with Pro Mujer, the traditional loan with a group guarantee and the ILCB or Individual Loan Within the Communal Bank, which was rolled out in 2015 in Mexico. Both loans, amounting to almost $4,000, have gone a long way; the mother of two has purchased a coffee maker and a deep fryer, she’s repainted her business, decorated its walls, purchased tablecloths, and added shelves to the kitchen.

Lorena has more ambitious plans in store for her home and business. She is in the process of expanding El Itacate’s kitchen and wants to build a number of rooms on her property that she can rent as temporary accommodation.

“If you work hard for it, you’ll see results that could change all of our lives,” Lorena tells her group, Las Monarcas, a reference to monarch butterflies who “gather and go through so much together before reaching their destination,” she explains. Lorena’s hard work has certainly paved the way to success all these years, proving that she can fly as far as she wants.