Pro Mujer Ranked Among Institutions with the Highest Portfolio Quality

With  more  than  40,000  clients  spread  across  six  departments  in Nicaragua, Pro Mujer ranked highly on the list of microfinance institutions active in Central America and the Dominican Republic published by the Central American and Caribbean Microfinance Network. 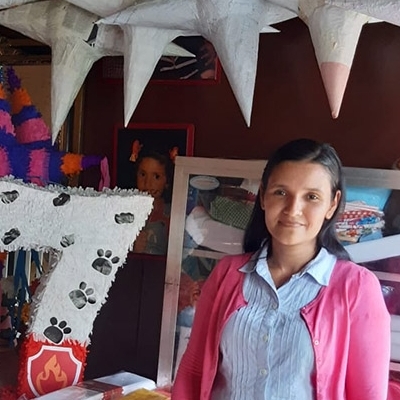 Nedesna Yunieth, 38, is the president of  Renacer, a community group in Chinandega, Nicaragua organized by shopkeepers who have received loans from Pro Mujer. For 10 years,  Nedesna worked with her family making handicrafts, primarily piñatas. But she dreamed about turning her creativity into a source of income and support for her family, including her five children.

Nedesna knocked on a lot of doors but was rejected  repeatedly because she didn’t have any collateral. Finally, she connected with Pro Mujer. Today,  Nedesna runs a successful micro-business creating piñatas and employs both her mother and her sister. Despite the pandemic and the difficult conditions in Nicaragua, her sales have stayed stable, and Nedesna has been able to maintain her excellent credit history.

In Nicaragua, Pro Mujer  supports  more than 40,000 micro-business owners like  Nedesna, making it the second-largest microfinance institution in the country, according to data from the Microfinance Chamber of Commerce (ASOMIF). Additionally, a report published by the Central American and Caribbean Microfinance  Network  (REDCAMIF) found that Pro Mujer  has the second-best portfolio quality in the country, with only 0.5% delinquent and/or high-risk loans.

According to data published by the Inter-American Development Bank, the financing gap for women in Latin America totals US $86 billion. “Access to credit helps economically empower women in vulnerable situations to help them reinvent themselves and make it through  difficult situations. Additionally, combining loans with ongoing training to support responsible credit use helps set women up for success,” said Gloria Ruiz, Director of Pro Mujer  in Nicaragua. “Success means building women’s confidence and solidarity, but also helping them recognize the value of their word, of respecting their commitments, and helping them feel proud that they are taking on these responsibilities today in order to build a solid foundation for the future of their business, their family, and their community,” added Gloria.

Pro Mujer  has worked with female micro-business owners in Nicaragua for more than 25 years, helping women access new opportunities and  leverage  them for growth.