Graciela Cortez Ordoñez faced many of the challenges shared by low-income women across Latin America—economic uncertainty, domestic strife and a sense of isolation. Graciela shared these experiences with a group of 300 of her peers during Pro Mujer’s annual Día de la Socia Líder (Client Leadership Day), which honors women who are Pro Mujer clients for their achievements. She spoke of being devastated by her husband’s infidelities and left alone to raise her young daughter as a single mother. With Pro Mujer’s support, she opened and grew her own business selling cleaning supplies. Now, years later, her business is thriving and so is her daughter.

Graciela is proud of her success: through her own hard work and dedication, she overcame the obstacles that threatened her and her family’s wellbeing. Today, she is a strong woman full of hope with a robust support network and a stable home and business. Her resilience and courage – as well as her encouragement to other women along the way that they too can do it – earned her a 2nd place prize during this year’s Día de la Socia Líder event held in Huasca, Mexico. 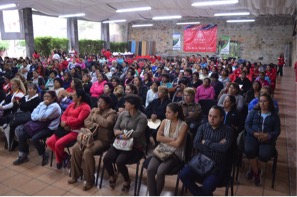 Graciela also acknowledged that her success was a group effort, instigated and developed with the support of other women in the Pro Mujer family. She turned to Mariana Serrano, a Pro Mujer client who runs a Zumba studio on the outskirts of Mexico City and who won 2nd place during last year’s Día de la Socia Líder event. “I want to thank you,” Graciela said to Mariana, “you inspired me to change my life.” She described how Mariana’s efforts to encourage other women to exercise motivated her to become a healthier, more fulfilled woman. Thanks to Mariana’s motivation, she has lost weight and feels better than ever. 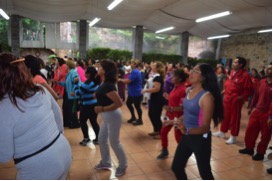 Pro Mujer clients and staff sweat it out in a Zumba class.

Role models, supporters, friends, teachers, mentors: Pro Mujer’s real impact lies in fostering meaningful relationships between women that help them grow, learn, and have the confidence to transform their lives. When we speak of a chain reaction, we speak of women like Graciela and Mariana, who give one another the strength to forge ahead.

During the award ceremony, Graciela was joined on stage by Norma Lopez from the state of Querétaro and Maria Guzman from Estado de Mexico, who won 1st and 3rd place awards respectively. The women were awarded modest cash prizes by a group of leaders from Pro Mujer Mexico, Pro Mujer Nicaragua Director Gloria Ruiz, representatives from the event sponsor, Pro Mujer supporter FIRA (Trust for Investments in Agriculture), and Guadalupe Romero Hidalgo, the president of the state of Hidalgo’s Integrated Family Development Department.

In addition, the communal bank “Gardens of Tultepec” was awarded the Communal Bank of the Year Award. “Gardens of Tultepec” was selected among thousands of Pro Mujer Mexico’s communal banks for their solidarity over the last year in which a beloved member of their group passed away. In tears, the courageous women of the group dedicated their award to their departed friend.

As a part of the day-and-half-long Día de la Socia Líder event, Pro Mujer’s client leaders also participated in workshops related to financial literacy, healthy lifestyles, self-esteem and even tried out a little Zumba dance. They also received free health screenings by Pro Mujer nurses for chronic diseases such as breast and cervical cancers, and diabetes, among others. 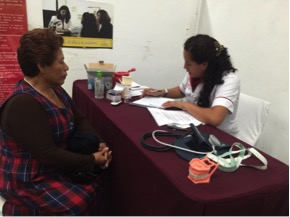 Women from different walks of life and 9 regions across Mexico had the unique opportunity to share, bond, and celebrate their accomplishments, which so often go unnoticed and unappreciated. Many thanks to our partner FIRA for helping make this year’s inspiring celebration a reality. 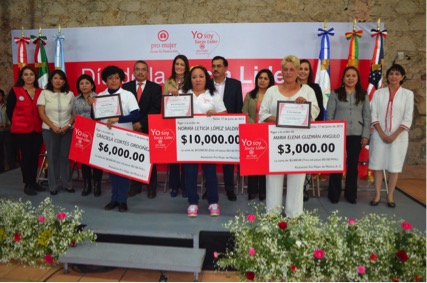 Graciela Ordoñez, left, Norma Lopez, center, and Maria Guzman, right are honored during the 2015 Dia de la Socia Lider prize ceremony for their strength and leadership. The prize awards come with cash prizes (in Mexican pesos) for the women to invest in their thriving businesses