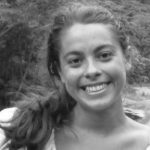 Women across the world have disproportionately low access to professional growth and opportunities. In fact, recent reports find that only 21% of senior management positions in North America and 23% of positions in Latin America are held by women. Women face burdensome gender-based expectations, are still responsible for the bulk of domestic unpaid labor, and are compensated less than their male counterparts.

Pro Mujer battles these gender-based inequities by providing nearly 300,000 low-income women micro-entrepreneurs with vital access to financial, health and human development resources to grow their businesses and improve their living conditions. We also do this through the hard work and dedication of approximately 2,000 employees, of which nearly 70% are women, including Rosario Perez, our President and CEO.

Prior to joining Pro Mujer in 2008, Rosario spent 25 years as a leader at JPMorgan Chase so it was with great excitement that Rosario was invited by JPMorgan Mexico’s Women’s Interactive Network (WIN) to participate on a panel discussion. I was also lucky to be there and listen to the interesting conversation about the social and financial inclusion of women both in the context of Pro Mujer’s work as well as Rosario’s own professional experiences. The event additionally served to showcase our long-standing partnership with JPMorgan and recognize fearless women leaders from all walks of life, including more than 40 JPMorgan employees in Mexico City who joined us for the event.

Rosario was joined onstage by Rodrigo Blanco, JPMorgan’s Managing Director and Conchita Calderon, Executive Director of New Business Development. Rosario discussed her career trajectory and also discussed how strong collaborations like the one between Pro Mujer and JPMorgan Foundation, which dates back 2003 and a total investment of close to US$1 million in support of women’s entrepreneurship, can have long-lasting impact. 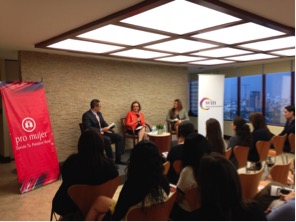 Rodrigo Blanco (left), Rosario Perez (center), and Conchita Calderon (right) discuss Rosario’s work experiences – and similarities – both at JPMorgan and as the CEO of Pro Mujer.

Arely Pavon Torres, a Pro Mujer client from Xochimilco, Mexico who is our 2015 Client of the Year, also spoke at the event. She shared a moving testimonial about the importance of her economic empowerment, which gave her the ability and strength to leave an abusive relationship and better care for her two daughters. “I used to be one of those women with downcast eyes,” she confessed. But today, Arely operates a successful potted plant business; she even sells her plants wholesale to Costco and has been able to build a beautiful home and provide a good education for her children. Arely has also benefitted from the most recent JPMorgan Chase Foundation donation, which helped Pro Mujer develop a new financial product that Arely now utilizes. 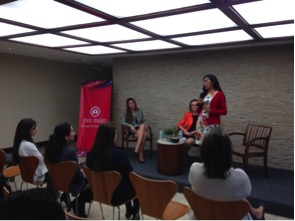 Both Pro Mujer and JPMorgan’s Women’s Interactive Network understand the importance of investing in women. Our joint efforts in cultivating women leaders and providing women across Latin America with new economic possibilities will help create a more equitable world for future generations.