RINGING THE BELL FOR GENDER EQUITY 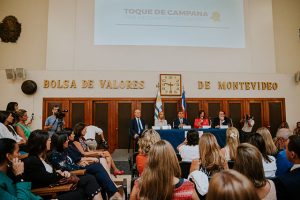 On March 12, Pro Mujer’s Chief Operating Officer, Carmen Correa, participated at the Ring the Bell event held in the Bolsa de Valores de Montevideo (Montevideo’s Stock Exchange). Uruguay’s vice president along with first lady, and representatives of the European Union, Inter-American Development Bank (IDB) and UN Women also attended the event. The goal of this meeting was to “raise awareness about the fundamental role businesses and markets play in reducing the gender gap.” 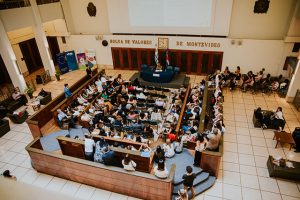 Representing Pro Mujer, Carmen’s speech “Impact Investing: the benefits of a gender-based approach” brought to light the impact that gender lens investing has on advancing gender equality, emphasizing that we are at a crucial moment for change. Gender equality would vastly reduce poverty, generating better economic performance and results. Carmen also provided an analysis on the current state of gender lens investing at the global level and developments over the last 20 years, including the different investing lenses that have had the most impact worldwide. 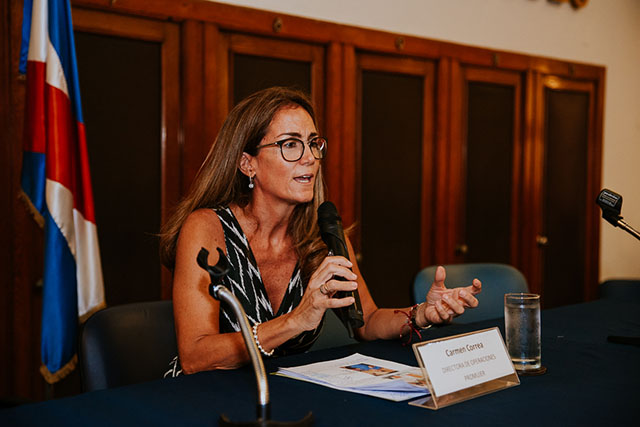 The event offered a valuable opportunity for Pro Mujer to speak directly to key leaders in business and development, and to encourage them to reimagine investing models where women are recognized as leaders of economic growth. According to a research by McKinsey Global Institute, closing the gender gap would add $28 billion dollars to the global GDP.

Among the attendees was Inter-American Development Bank’s representative in Uruguay, Matias Benderskydel, who spoke on how to promote investments that impact women-led businesses, on supporting equity in the workforce, and on companies that develop products and services for women and girls.

Pro Mujer strongly believes that gender lens investing not only advances gender equality but is also good business. As such, we are committed to promoting its potential for the Latin America region by encouraging entrepreneurs, investors and leaders to invest in women. To learn more about our efforts, we invite you to learn about Latin America’s first Gender Lens Investing Forum hosted by Pro Mujer.