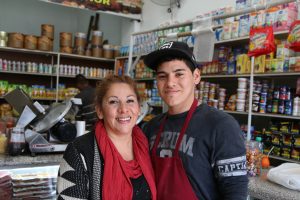 Sandra and her son Dario at Dario’s workplace in Salta, Argentina.

Sandra Sanchez, a mother of four living in the Argentine province of Salta, was raised by her grandparents. While they couldn’t afford to put her through high school, the couple made sure Sandra acquired the basic tools needed to forge ahead in life. That’s how she learned to sew in several dressmaking courses, a skill that continues to bear fruit today.

For years, Sandra took on small sewing jobs from neighbors, asking them to provide the materials, as she could not afford them. Thanks to the small loans she’s received from Pro Mujer over the past year, Sandra runs a fully stocked sewing business from the comfort of her home, serving customers from Barrio las Tunas (her neighborhood) and beyond.

Sandra’s first loan of approximately $60 allowed her to kick start her business. With her second loan six months later, she was able to buy tools, fabric and thread. Her third and current loan turned into more fabric, curtains, pajamas and other clothing. In addition, it helped pay her daughters’ school bills. Since she joined Pro Mujer, Sandra’s earnings have increased by 50 percent, she says, allowing her to finally lay tile on all four bedroom floors.

In the past 12 months, Sandra’s life has been transformed in more ways than one. Earlier this year, she started having strong headaches day and night. When she visited her local Pro Mujer center to repay her loan, the nurse invited her to go in for a check up. A quick blood pressure examination and subsequent studies revealed that Sandra needed to be treated for hypertension, a diagnosis that caught her completely by surprise.

Since her diagnosis, Sandra has made some necessary adjustments to her lifestyle.

“I started eating differently; I don’t add salt to the food, I barely drink soda, I drink more water, I started walking more and I quit smoking,” she asserts.

And the changes don’t stop there. Sandra has a renewed appreciation for herself and her contribution to her family’s wellbeing.

“Before, I used to get up in the morning and that would be it,” admits Sandra. Today, her occupation gives her a powerful reason to start the day. “I know I can help my children with what I do…I realize that I am doing something for me that’s made by me with my very own hands.”