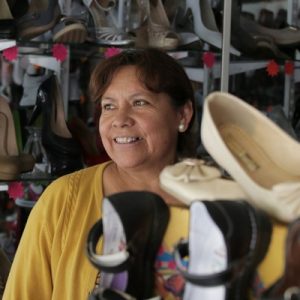 When Maria Guerrero first moved to Tezontepec, a small town in the Mexican state of Hidalgo, her business consisted of little more than a shoe catalogue and a high dose of determination. If she wasn’t selling shoes from door to door, the mother of two was washing clothes to pay the bills.

It wasn’t long before Maria found out about Pro Mujer and took out her first loan. A few cycles later, in April of 2006, she opened the very same shoe store from which she operates today.

“This loan has helped me grow my business, but most importantly, it’s allowed my two daughters and I to forge forward,” says Maria, a proud holder of Pro Mujer’s Individual Loan within the Communal Bank (ILCB) as of 2015.

The ILCBs were rolled out in Mexico in 2015 with the support of the MetLife Foundation. They offer clients the ability to take out individualized loans, as opposed to the traditional loan with a group guarantee, while still enabling them to continue meeting with and receiving the support of their communal banks.

Maria’s husband left the family soon after Maria joined Pro Mujer, the memory of which still brings tears to her eyes today. School bills piling up, the single mother had no time to waste on lawsuits and focused on her business and family instead.

Fast-forward nearly ten years and Maria’s oldest daughter, Daisy Lizethe, is a law school graduate with a family of her own, a partner in her mother’s shoe business and also a Pro Mujer client. The younger one, Gisela Guadalupe, is well on her way to graduating high school and a future holder of a Pro Mujer loan, which she plans on using to invest in the family business.

“Six years ago, we had approximately 1,900 pair of shoes in the store. Today, we have over 5,000,” she says proudly. “We try to get the loan on Thursdays so we can head down to Mexico City or Leon [in the state of Guanajuato] on Fridays and refill our inventory.”

Maria appreciates the opportunity to hold an individual loan because it allows her to pay as soon as she has the cash, as opposed to having to wait until the entire group makes their payment on a specific date. In addition, she doesn’t have to worry about other members potentially defaulting.

“It’s fast and reliable,” she says. “I can pay a low interest rate and if I have the cash sooner, I can make my payment and take out another loan.”

Maria has also benefited greatly from Pro Mujer’s integrated services. In the past, a doctor would see the family only in case of illness. Today, Maria and Daisy get Pap smear screenings and other services periodically.

Aside from welcoming her youngest daughter into the family business, Maria’s and Daisy’s future plans include opening (and staffing) a second shoe store, a 180-degree turn from the door-to-door catalogue sales days.

“I feel very happy when hearing the words ‘Pro Mujer’ because my life has changed radically thanks to the loans and the trust it’s given me,” says Maria. “As long as God wants to, I am and will continue to be a part of Pro Mujer.”