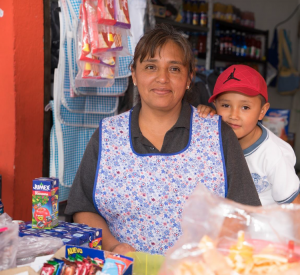 The last few years have been particularly trying for Maria Elena Neri Flores, a longtime Pro Mujer client from the municipality of Tecamac, north of Mexico City. In 2012, the mother of three lost her apartment of 19 years after her husband became unemployed and they could no longer afford the mortgage. A few years later, someone broke into their home and stole over $2,000 in cash, which Maria had saved to invest in her uniform sewing business.

“Onwards and upwards,” says the mother of three, shining a broad smile. In times like these, Maria likes to tell herself, “I don’t have enough funds right now but a loan from Pro Mujer is on its way,” the thought of which gives her hope.

Maria has been selling school lunches for two decades. A small table and cart was all she initially had. After four years, and with Pro Mujer’s support, that turned into a proper market stall.

“[The stand] was very big but there was no merchandise to fill it with,” Maria recalls, always reminding herself and her family that when the Pro Mujer loan arrived, she’d not only put it to work but aim for an increase and invest it right back.

Once the stall was fully stocked, Maria aimed higher, adding needlework to her list of services offered. She’d repair clothes and even make curtains and ruffles from the very same chair she sold school lunches from.

“When the next Pro Mujer loan comes in, we’ll buy a bigger sewing machine,” Maria recalls telling her son. Today, industrial machinery is all she works with.

Maria chokes up when talking about losing her home four years ago.

“At times I feel as if life were crushing me,” says Maria. “It’s demoralizing.”

But she comes back around with a smile, saying she’s since bought a piece of land and is now laying down the foundations thanks to Pro Mujer’s Individual Loan within the Communal Bank (ILCB), which was rolled out in Mexico in 2015. The ILCB offers clients the ability to take out individualized loans, as opposed to the traditional loan with a group guarantee, while still enabling them to continue meeting with and receiving the support of their communal banks.

“Thanks to the individual loan, I was able to put up a fence and divide up the rooms,” she says. “With the uniform earnings and the next loan, I’ll lay down the tiles and get my house ready to move in so we can be safe.”

Tecamac is located in the State of Mexico, a state with some of the highest crime rates in the country. In 2013, there were nearly 60,000 cases of auto theft in the state. Maria’s son José, also a Pro Mujer client, knows that number well, having been robbed of the taxi he drives for a living right around that time.

“Life in Tecamac used to be quiet. Now there’s a lot of crime,” says Maria, whose house has been broken into twice. The last time she was robbed, Maria asked her Pro Mujer advisor to give her extra time to make her payment. “That’s what the group is for,” the advisor replied.

The group did, in fact, cover Maria’s loan payment, which she repaid shortly after.

“I have my workshop and I am on the way to having my own, safe home,” she says. “Now I want a workshop where I can cut a piece of fabric and tell others how I want it sewn.”