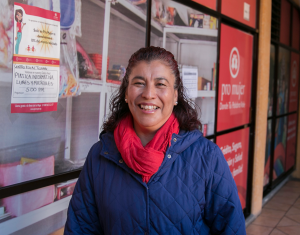 Elsa Castillo at a Pro Mujer Center in Tecamac, Mexico.

Elsa Castillo first heard about Pro Mujer through a flyer nine-and-a-half years ago. The mother of two from Tecamac, a municipality in central Mexico, was drawn to become a Pro Mujer client, not simply because of our micro loans, but because of the integrated services we offer. In fact, Elsa took out her first loan for one reason only: to become a part of Pro Mujer.

A year later, Elsa became an Advisor at her local Pro Mujer center in Tecamac, where she was responsible for supporting 480 women clients. It wasn’t long before her supervisor asked her to head the entire center, and even though Elsa thought it was too big a task, her son convinced her to go for it. Six and a half years later, Elsa was promoted to become regional communal bank chief in central Mexico.

“I joined a group for the duration of two cycles, a full year, but what caught my eye the most was the Advisor’s empowering work with us and the caring way in which she treated us,” says Elsa. “I remember thinking, ‘I want to wear a Pro Mujer shirt like hers.’”

Our 2,000+ staff members are the backbone of Pro Mujer’s mission, carrying the responsibility to provide high quality, transformational services to Pro Mujer clients. Last year, we began the implementation of an improved training and development program to further empower our own staff to be role models and advance opportunities for the poor women they directly serve. Their jobs are multifaceted and very demanding. Our team is comprised largely of women, drawn from the local communities, with 15 percent being former clients. Therefore, Pro Mujer’s investment in our staff’s development is not only a key to our organization’s success, but also a powerful contribution to building strong communities with engaged citizen-leaders.

The Pro Mujer Center in Tecamac is one of 12 centers in the densely populated State of Mexico, which engulfs Mexico City, and one of 41 centers nationwide. The percentage of women affected by domestic violence in the state is 42, the highest in all nine Mexican states where Pro Mujer works.

“During training I was asked to motivate clients to fight abuse so they could move forward,” she says. “I felt bad because I was preaching something I couldn’t apply to my own life and I didn’t know how to get out of that situation…I worked on myself so I could stand in front of them and tell them, ‘you can do it.’”

As a member of the Pro Mujer team, Elsa wears her red polo shirt every day with pride.

“When I came back from vacation, I looked at my uniform and thought, ‘I really missed you,’” Elsa says with a laugh, adding that the resources, the training and support she gets as a Pro Mujer staff member are invaluable.

“We are a family. Pro Mujer sees in us not just an employee but someone who wants to forge ahead in life, and have a positive impact in our communities.”