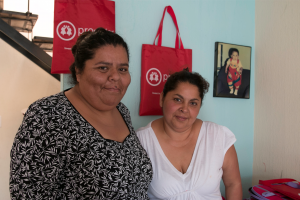 Diana and Silvia at their workshop in Huehuetoca, Mexico.

Diana Lozada and Silvia Martinez met more than a decade ago, shortly after they both moved to Huehuetoca, a municipality in central Mexico. In 2010, they each signed up for a Pro Mujer loan of $240 in hopes of launching a sewing business together; they wanted to be their own bosses. The working moms started off by securing a workspace, a multi-story home-turned-workshop owned by Diana’s family. Every Pro Mujer loan they received went directly into their business, allowing them to acquire the tools they needed to succeed. Today, their credit has more than tripled and they’ve both assumed leadership roles within their communal bank multiple times.

Diana and Silvia, business partners and close friends, say they need more time in the day to keep up with the growing workload. Thanks to Pro Mujer’s support, Silvia is currently adding a third floor to her home and has expanded the kitchen and a bedroom. For Diana, the impact is felt on a daily basis.

“I no longer feel anguish every day over not being able to feed my teenage daughter,” she says. “We still have needs, but now that both my husband and I work, that I have my own business, we know we’ll be O.K.”

Diana’s and Silvia’s next big goal is to buy a textile printing machine, which costs approximately $20,000, and a van.

“We don’t want to depend on anyone anymore. We want to create and deliver our very own designs,” says Diana, who’s been sewing for more than 30 years. With Pro Mujer, she’s confident that they’ll reach that goal.