Taking a Stand Against Gender-Based Violence in Latin America

On the International Day for the Elimination of Violence Against Women, Pro Mujer strengthens its commitment to eliminating gender-based violence in Latin America to ensure that every person can live with dignity and in a safe environment. 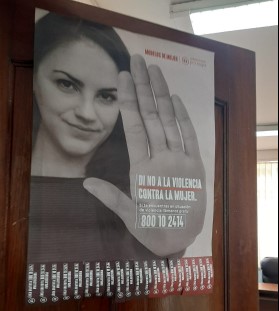 Prior to the COVID-19 pandemic, Latin America had some of the highest rates of gender-based violence in the world, with six countries in the region representing 81% of global cases and with 10 of the 12 countries with the highest rates of femicide in the world also located in the region. By isolating women at home and making it more difficult for them to access social and health services, the pandemic has only caused gender-based violence in Latin America to increase, exacerbating underlying root causes and harmful social norms that perpetuate gender inequity and lead to violence.

According to the United Nations, domestic violence against women in 2020 increased between 30% and 50% in Argentina, Mexico, Colombia and other countries in the region. In addition, violence against transgender people has increased, with research showing that at least 311 trans or gender-diverse people have been murdered in Latin America between October 2020 and September 2021, compared to the 242 who were murdered in 2019.

At Pro Mujer, we are committed to working with local allies to eliminate gender-based violence in Latin America. For example, in response to the over 40,000 cases of gender-based violence reported by the Bolivian government during the pandemic, Pro Mujer launched Mujer Segura, a free nationwide helpline in Bolivia that provides women who are experiencing violence with access to legal and psychological counseling. Since its launch in July 2020, the helpline has received approximately 4,700 calls, providing nearly 78% of those callers with counseling, referring 7% to lawyers and 15% to community advocates. In December 2021, Pro Mujer will expand the Mujer Segura program through a partnership with Farmacias Chavez, a pharmacy chain in Bolivia, which will raise awareness about the helpline through innovative campaigns designed to reach more women in situations of violence.

“Through Mujer Segura, we are, at the most basic level, providing those who are experiencing violence, or who are at risk of violence, with the tools that they need to feel safe,” said Cecilia Campero, Country Representative for Pro Mujer in Bolivia. “Beyond that, by offering this program, Pro Mujer is prioritizing the elimination of gender-based violence in the region and building a foundation to work with partners to drive collective action that addresses the root causes perpetuating violence against women and advances gender equality.”

In addition to Mujer Segura, Pro Mujer is receiving training from FONCAP in Argentina through Plan Lena, a program that promotes integrating a gender perspective into the microfinance sector by providing workshops and training to institutions providing financial services, such as Pro Mujer, including on gender-based violence and how to implement protocols that support the development of inclusive and violence-free workplaces and projects. Having completed the first two phases of the three-phase project, Pro Mujer has received feedback that a majority of those who participated in the gender-based violence prevention training feel more equipped to deal with situations of violence thanks to the training.

In 2022, Pro Mujer seeks to strengthen its team’s capacities to identify and support people experiencing gender-based violence. In collaboration with Johnson & Johnson Mexico, Pro Mujer is helping design a +10 hour training as part of the “Health without violence” campaign aimed at health professionals. The training will train more than 300 healthcare professionals on identification, prevention, and timely response to cases. Participation will be open to healthcare professionals and community healthcare workers across the region.

With gender-based violence more prevalent than ever in Latin America, these programs are just a start to ending the cycle of violence, which is why Pro Mujer recognizes this year’s International Day for the Elimination of Violence Against Women as an opportunity to continue to find ways to expand its programs and work to address the root causes that perpetuate this violence, ultimately creating a better and safer world for everyone.

Learn more about Pro Mujer’s programs and how you can take a stand to end violence against women during the 16 Days of Activism against Gender-Based Violence.