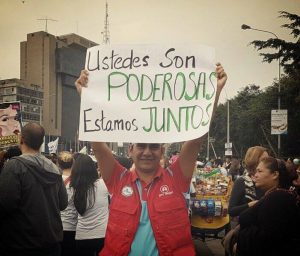 Thousands in Argentina gathered last Wednesday to protest a growing epidemic of violence against women in Latin America, and to mourn the latest case of Lucía Pérez, a 16-year-old-schoolgirl who died after being drugged, raped and tortured in the coastal city of Mar del Plata, Argentina. Lucía became the latest of 19 women killed in the country this month.

Organizing under the hashtag #MiércolesNegro (Black Wednesday), thousands took to the streets, and thousands more united in a one-hour work strike. Although Argentina adopted an anti-femicide law in 2012 to ensure harsher penalties for the killing of women for their gender, the violence has continued. According to La Casa del Encuentro, an organization aiding female victims of violence, every 31 hours a woman in Argentina is killed for being a woman.

Violence Against Women: A Region-Wide Epidemic

In Latin America, a region with some of the highest rates of inequality in the world, marginalized women face discrimination, greater health risks and paralyzing violence. In fact, Latin America holds the second highest femicide rate in the world. According to the Economic Commission for Latin America and the Caribbean, up to 40 percent of women in the region have been victims of violence at some point in their lives.

Since 1990, Pro Mujer has served hundreds of thousands of these women, providing them with financial, educational and health services. As a women’s development organization in Latin America, we have witnessed first-hand how gender-based violence not only threatens women’s physical security but also stunts their ability to thrive. Sadly, too many of our clients have seen and experienced this type of violence, and some have tragically lost their lives.

Achieving gender equality in Latin America will remain impossible if we do not confront the pervasive violence against women taking place in the region. Any solution must include justice for victims, forcing lawmakers and law enforcers to take this violence seriously. Victims must also be encouraged and protected when speaking out. Being able to track cases would result in a deeper understanding of what is happening, why and what must be done.

Confronting the Challenges Ahead

Violence against women is often perpetrated by family members and those closest to the victims. In 2013, more than 38 percent of femicides worldwide were committed by intimate partners. The social and familial pressures that accompany violent crimes against women, in addition to ineffective justice systems, have resulted in less than 40 percent of women seeking any help. Among those women who do seek help, less than 10 percent report the crime to authorities. We are currently facing a major data gap caused by insufficient reporting, cultural shame and a lack of research. These challenges make it nearly impossible to implement solutions supported by data.

Women that do report violent crimes must then contend with justice systems that fail to take these crimes seriously, offering inadequate investigations and prosecutions. Moreover, failings in the justice system extend beyond local authorities. Beginning in 2007, countries throughout Latin America began to introduce legislation to prevent and penalize femicide, resulting in more than 15 legislations enacted in the region. However, a 2012 Hemispheric Report from the Oranization of American States (OAS) revealed that most of these States continued to sideline the issue, demonstrating little interest in enforcement or understanding whether the measures had any effect in actually reducing femicide rates.

In 2016, a woman in Peru named Lady Guillen, who was brutally beaten by her ex-boyfriend, saw her aggressor walk away with a four-year probation for a crime that typically merits a seven-year prison sentence. This case, among many others, sparked outrage on social media and grew into a massive demonstration in Lima, Peru with 50,000 voices declaring #NiUnaMenos (#Not One Less). The #NiUnaMenos movement has spread across Argentina, Uruguay, Mexico, Colombia, Brazil and Chile 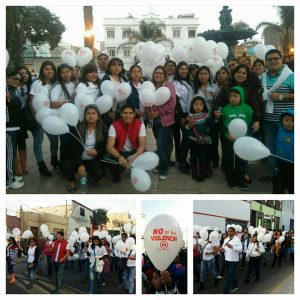 United, Pro Mujer says “No More” to violence against women.

The women of Pro Mujer, within our organization and our clients, often know violence intimately. Pro Mujer has proudly participated in #NiUnaMenos and #MiércolesNegro demonstrations. Our teams in Peru and Argentina joined thousands in the streets; voicing Pro Mujer’s commitment to changing attitudes toward violence against women and demanding justice.

We recognize that ending violence against women is not easy. It involves changing a culture so that violent acts can begin to be taken seriously. It also calls for ensuring justice for victims and collecting data to better understand our strategies. This work requires solidarity among individuals, organizations and governments to act and raise awareness in the region and beyond.

Pro Mujer has been working for over 25 years towards a vision of Latin America where all women thrive. This goal can only remain viable by standing up today and tomorrow with our sisters and brothers to say enough is enough, #NiUnaMenos. Join us.