This is the story of Karla González, a Mexican entrepreneur and Pro Mujer client who used her entrepreneurial skills to accomplish her dreams and support both herself and her community. 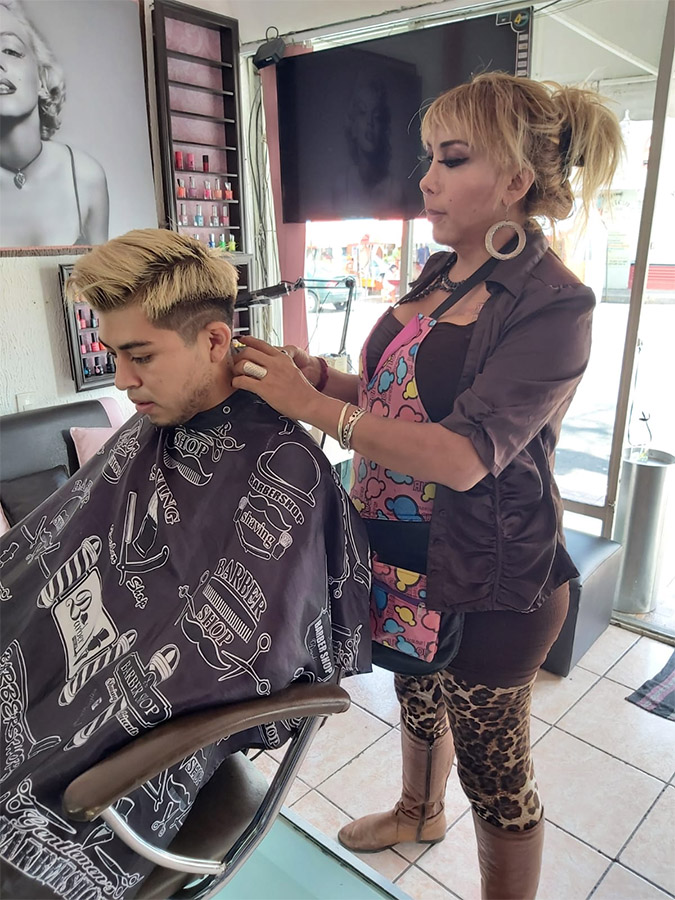 When she was 15 years old, Karla had to drop out of school and look for work to help support her family, eventually getting a job cleaning at a beauty salon in Mexico City. In just a few months, Karla learned how to cut hair and spent every moment she could practicing. Although she didn’t have any formal training, her boss recognized that she had a lot of potential, and that’s when Karla’s dream of becoming a hair stylist began.

Her dream was put on pause when her mother sent her to live with her aunt in Minatitlán, Veracruz, nine hours away from Mexico City. “I wanted to wear makeup and be a woman,” shared Karla, but her mother wouldn’t let her be herself.

A survey on experiences of discrimination against the LGBTQIA+ community implemented by Mexico’s National Council to Prevent Discrimination found that 30% of LGBTQIA+ people were forced to leave home before turning 18 and reported that LGBTQIA+ young people often face discrimination both at home and at school, with 30% of survey respondents reporting that they were bullied at school because of their sexuality or gender identity.

In Minatitlán, Karla worked in construction for a while, and then as the manager at a rotisserie chicken restaurant. She used the money she earned to pay for beauty school, and then set up a little space with a styling chair, a mirror, and the tools she needed to start cutting hair. When she was 21, Karla returned to Mexico City. A year later, she opened her first beauty salon—Karla was living her dream.

“That was when I knew that one day I would buy my mom her house,” said Karla. “Now I have more than 40 diplomas from different courses and certificate programs.”

With support from Pro Mujer, Karla has grown her business and has even helped other beauty salons where she has worked grow as well. She now owns multiple different properties, including the house where her mother lives.

Entrepreneurship offered Karla independence and autonomy, and now she’s committed to paying it forward by providing job opportunities for her community. In addition to her work as a hair stylist, in 2007 and 2008, Karla received special recognition from the government of Coyoacán for her activism and commitment to the LGBTQIA+ community.

“I’m not scared of starting a new business, of starting over. If I have to do it, I’ll do it,” says Karla. “I take care of my employees. If one of them comes to me and tells me that they want to take over the business, I let them. I know that I can always start again.”

Learn more about the financial, entrepreneurship, and health care services Pro Mujer offers in Latin America and how you can become a partner to drive gender equality in the region.